Viscount Bulkeley Memorial. The high-relief sculpture, situated in the chancel, is by Sir Richard Westmacott (1775-1856) of London, who was in his time Britain’s foremost sculptor of public statues. The inscription on the pedestal reads:

To the memory of him,
whose every action both of
public and private life,
was guided by sound principles
and kindest feelings,
this monument is erected
by his sincerely afflicted widow
Elizabeth Harriet
Viscountess Warren Bulkeley

Thomas James
Viscount Warren Bulkeley
of Cashel, in the county of Tipperary,
in the Kingdom of Ireland;
Lord Lieutenant of
the county of Caernarvon;
Chamberlain and Chancellor
of North Wales;
and hereditary Constable
of Beaumaris Castle;
created an English Peer, May 11th 1784,
by the title of
Baron Bulkeley of Beaumaris;
He was born Decr 12th 1752:
and died June 3rd 1822.

(Westmacott was also the author of the Penrhyn Memorial in St Tegai’s Church in Llandygai.)

Charlotte Williams Bulkeley Memorial. This free-standing sculpture, also situated in the chancel, is by John Ternouth (c1796-1848) of London (best known for his bronze relief depicting a scene from The Battle of Copenhagen on the plinth of Nelson’s Column in London). The base of this sculpture bears the following inscription (also in Welsh):

Sacred to the memory
of
Charlotte Mary
the wife of
Richard Bulkeley Williams Bulkeley
of
Baron Hill in this county, Esquire
and
eldest daughter
of William Lewis Hughes of Kinmel Park
in the county of Denbigh, Esquire
Obt. May 11th 1829, aged 23 years!!

Liberal politician Richard (1801-1875) was the 10th Baronet Williams-Bulkeley of Penrhyn in the County of Caernarvon. He was the son of the 9th Baronet Williams, but he took the additional surname Bulkeley in 1826 on his succession to the estates of the 7th Viscount Bulkeley, Thomas James Bulkeley. Three years after Charlotte’s death, Richard married Maria Frances Massey-Standley. 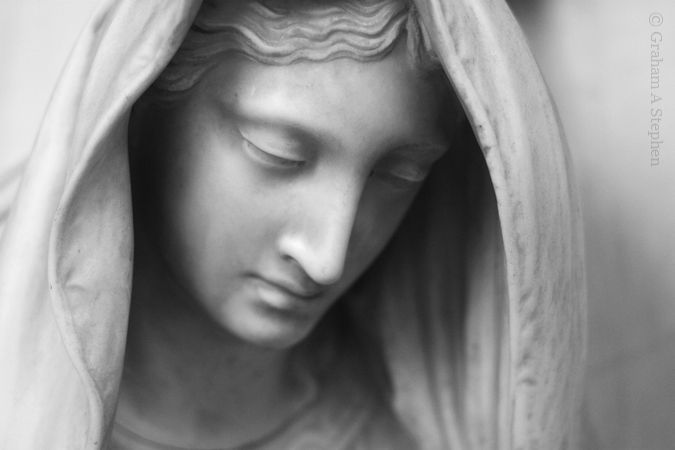 Viscount Bulkeley Memorial. Bust of Thomas James Bulkeley (1752-1822), 7th Viscount Bulkeley of Cashel and Baron Bulkeley of Beaumaris. In 1777 he married Elizabeth Harriot (c1760-1826), daughter and heir of Sir George Warren, Knight Companion of the Order of the Bath. In 1802 he changed his name to Warren-Bulkeley in order to inherit the Warren riches. Both of his titles became extinct when he died in 1822. 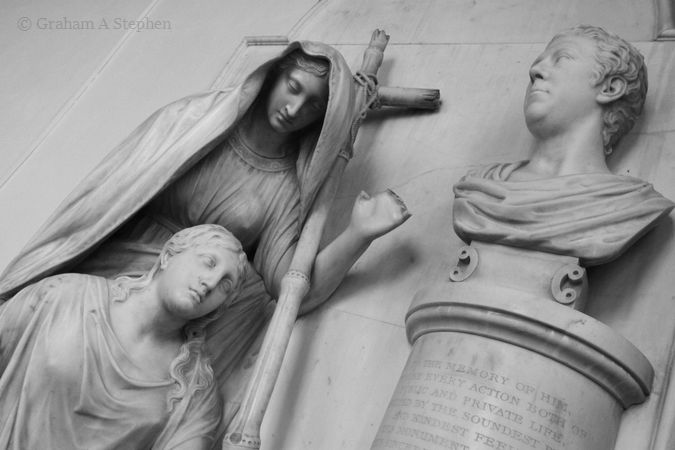 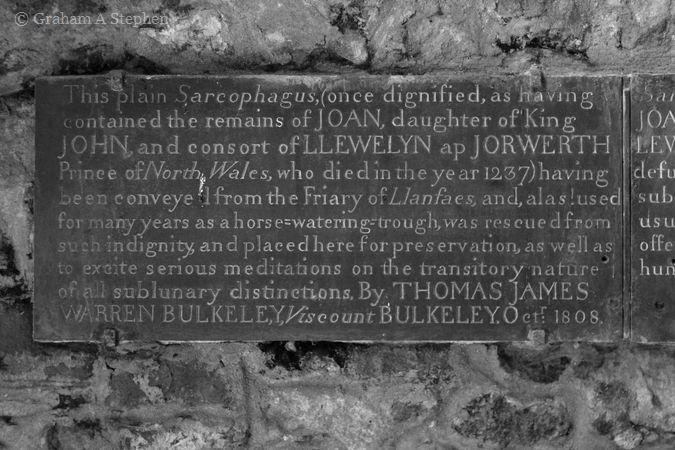 This plain Sarcophagus, (once dignified, as having contained the remains of JOAN, daughter of King JOHN and consort of LLEWELYN ap JORWERTH Prince of North Wales, who died in the year 1237) having been conveyed from the Friary of Llanfaes, and, alas! used for many years as a horse-watering-trough, was rescued from such indignity, and placed here for preservation, as well as to excite serious meditations on the transitory nature of all sublunary distinctions. By THOMAS JAMES WARREN BULKELEY, Viscount BULKELEY. Octr 1808.

Effigy of Joan (c1191-1237), Lady of Wales, on the lid of her stone coffin. Known in Wales as Siwan, Joan was an illegitimate daughter of King John of England and was married to Llywelyn the Great (c1172-1240), Prince of Wales, in c1204. Her body was laid to rest at the Franciscan friary founded by Llywelyn in her honour at Llanfaes, which was consecrated in 1240. The friary was destroyed in 1537 by Henry VIII during the Dissolution of the Monasteries and the coffin was subsequently abused until being brought to Baron Hill in the early 19th century by the 7th Viscount Bulkeley. It was later moved to the church in Beaumaris. 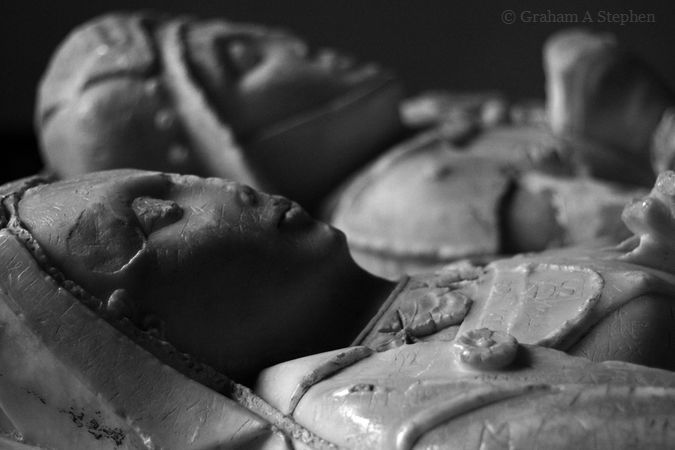 The alabaster tomb, situated in the north aisle, features full-length effigies of William Bulkeley and his wife Elen, daughter of Gwilym ap Gruffydd of Penrhyn, and dates from around 1490. William settled in Anglesey having moved from Cheshire. From the 14th century there was a thriving sculpture industry centred around the south Derbyshire alabaster quarries. The mineral is softer than marble and is therefore easier to work, but is not suitable for outdoors installations. So-called ‘Nottingham alabaster’ was popular for religious works. The individual panels for this tomb would have been carved locally close to the quarries and then transported for final assembly in situ. 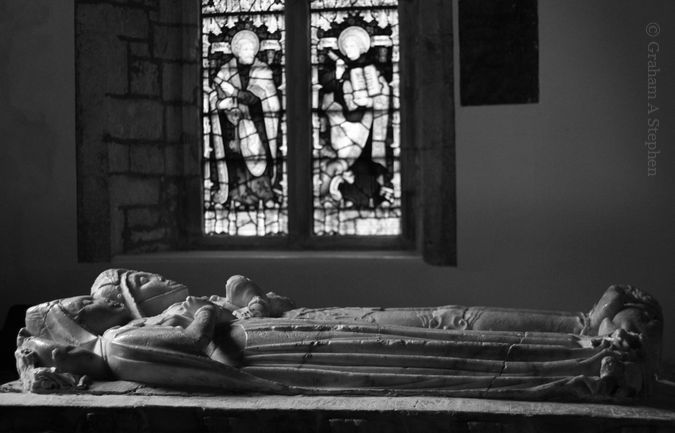 Angel choir-stall arm rest. The 20 choir stalls in the chancel date from the 15th century and were most likely originally from the friary in Llanfaes.

Winged-angel carved misericord in the choir stalls. A misericord, or ‘mercy seat’, is a ledge on the underside of the folding seat. This afforded the occupant some comfort while required to be in an upright position for long periods of prayer with the seat folded up.

The contemporary misericord carvings feature a variety of medieval characters, including bishops, monks and nuns, merchants, and also working men and women.